After several weeks from the final release of all 42 Eurovision 2017 entries, we have collected the first results from your own rating on Facebook! ESCToday has once again organized a voting process via the Facebook reactions, where each reaction was counting as a set of points just like in the Eurovision Song Contest. 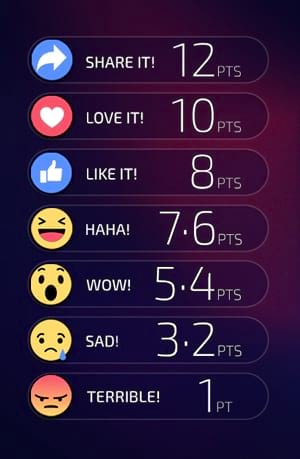 We have done the math!

With 76 sets of 12 points and 345 sets of 10 points, the overall winner of the poll until now is Italy! The hot favorite for winning this year’s Eurovision has already reached more than 94 million views on YouTube and is the only one who has managed it so far. It is also quite impressing that in your rating the entry notes a huge difference of 1254 points from the runner-up Sweden, while in the rest of the scoreboard we see e.g. Romania to be ahead of the United Kingdom by only 1 point!

The list with the full voting results with the countries in points order derives as follows:

As you can see, the Top 5 is completed with Israel, Bulgaria and France, while Belgium, Portugal, Romania, United Kingdom and FYR Macedonia are the other 5 entries to enter the Top 10, according to your ratings.

Results of the two semi-finals

Robin Bengtsson is leading the Facebook poll for the 1st Semi-Final on 9 May. That doesn’t surprise us, as since his announcement as the Swedish entrant in Melodifestivalen 2017, has always been one of the most favorites in all polls and odds. Belgium and Portugal, which also gain high placings in the odds, are 2nd and 3rd respectively.

On the top of the poll for semi-final 2 we find Israel with IMRI and his entry I feel alive with 4529 points. The singer has been awarded 46 shares (12 points) and 230 Love reactions (10 points). In this semi-final, very small differences to the total points are being observed (e.g. only 10 points between FYR Macedonia and Estonia), which can easily change, as the rating process is going on until the contest.

You can see in detail what sets of points has each country received so far in its participant profile in our official webpage.

So now we are waiting for you who haven’t casted your votes yet to do it! You may rate your favorite entries on our official page on Facebook via the participant profiles in esctoday.com.

The complete results from the ESCToday rating will be announced a little bit before the three shows in Kyiv in May.