The Daily Press Poll predicts trends following the impressions of the press from the first rehearsals. The voting and results for Semifinal 1 were divided into two days, and combined in a way that will try to reflect the actual situation.

During Day 1 we had Armenia as the winner (92p) and Russia as the runner-up (90p) along with The Netherlands (53p) which got a lot of attention from the press. Czech Republic surprised us all in Day 2 setting a new high record for the poll with 110p, and Austria being the runner up with 57p. These were probably the strongest countries of this semifinal.

Setting the results of the semifinal together, we could see that also Hungary, Cyprus and Malta are likely to qualify. Places 9-10 were already in the Fighting category, that went down up to the 15th place, including countries that had a lot of work to be done after first rehearsal. Unfortunately, Iceland and Estonia did not qualify and the qualifiers were Azerbaijan (11th place) and Croatia (14th place), which managed to improve their performance in order to make them qualify.

The BigPoll predicts the qualifiers based on the votes from you, our fans and followers. BigPoll’s ballot opened right after the second semi-final rehearsals finished and all of our readers were invited to participate by casting their predictions.

Totally 1395 users shared their predictions from all over the world, including Panama, China, Chile and Mauritius. BigPoll is using the same voting system as the senior Eurovision Song Contest itself, so the results represented only the votes from countries participating on the first semi-final, as well as the automatic finalists which are eligible to vote; these are France, Spain and Sweden.

The BigPoll has managed to have a slightly better prediction, guessing all countries correctly, missing The Netherlands and guessing that Iceland would have qualify.

The voting for semifinal 2 of the BigPoll is still open! Find out how to cast your votes and have your say here. It is possible to find a conclusion of the Press Poll for Semifinal 2 here. Prior to the final, the concluding Press Poll will be held and the Top 10 will be revealed in a special show live on YouTube on 13 May at 23:30 CET!

Stay tuned to ESCToday for more news regarding the Eurovision Song Contest 2016! 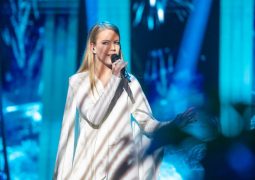