Preparations for the forthcoming 2020 Eurovision Song Contest are in full swing in the Netherlands, with NPO working working round the clock in order to showcase an extraordinary show come May. One of the biggest mysteries surrounding the upcoming competition is regarding the potential hosts. There has been much speculation and rumours doing the rounds in the Dutch media on who could bag the role(s). Let’s check out some of the names who have been tipped for the coveted job! 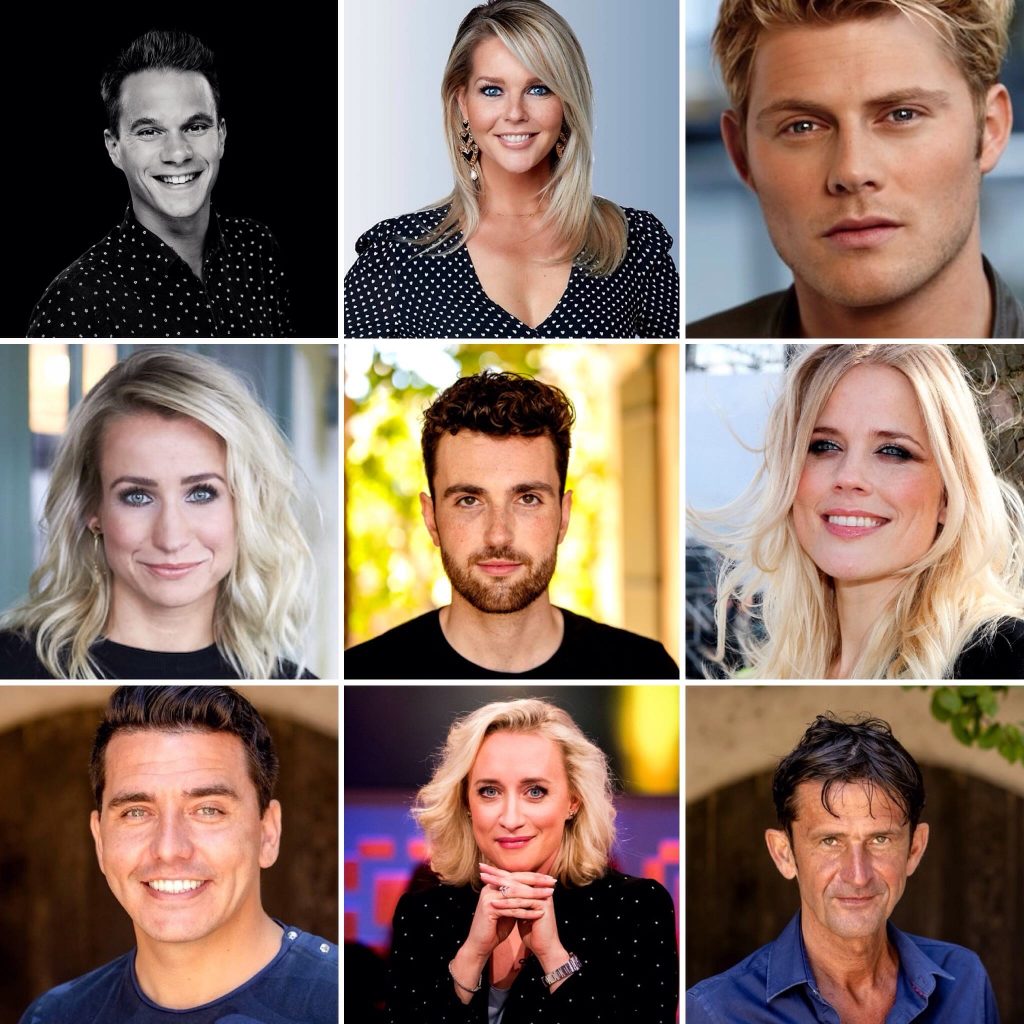 The 2020 Eurovision Committee is currently working from strength to strength in their quest to shortlist the potential candidates and ultimately make their choice.

The last time the Dutch hosted the Eurovision Song Contest was back in 1980 in The Hague when Marlous Fluitsma was the mistress of ceremonies. That year the Dutch went out of the box and decided to bring a native host for each of the competing countries, hence each country’s act was presented by a native tv presenter live from The Hague.

The first time the Dutch hosted the Eurovision Song Contest was in 1958 when Hannie Lips hosted the event in Hilversum.

We must note that The Netherlands has hosted the Eurovsision Song Contest four times, an all four ocassions the event was hosted by a solo female presenter.

How many hosts will we see presenting the competition in the Netherlands next year? This year Israel opted for four hosts. We have seen quite a few combinations of hosts in the event throughout its history from solo presenters to duos, from all male trios (Kyiv 2017) to all female quartets (Lisbon 2018).

The first time we saw a male-female duo host the competition was back in 1978 when Paris hosted the event, whilst the first time we had three hosts on stage was in 1999 when Jerusalem welcomed the Eurovision bandwagon for the 2nd time in ESC history.

Who will host Eurovision in the Netherlands?

The list of potential candidates to host Eurovision 2020 is quite large with many celebrated Dutch tv hosts, singers, actors and personalities. Will NPO opt for in house hosts or will it think out of the box and outsource the presenters as KAN did this year: Erez Tal and Assi Azar work at private Israeli Channel 12 and Bar Refaeli is an internationally acclaimed model. Lucy Ayoub was the only host working at KAN, not forgetting that Assi Azar co hosts the Israeli national selection The Rising Star on Channel 12.

Let’s check out the potential Dutch candidates who are tipped to host ESC 2020 in Rotterdam next year!

Cornald Maas is a household name in the Netherlands when it comes to Eurovision, often addressed as the Dutch Mr. Eurovision! He has been the Dutch Eurovision Commentator for many years and has also been part of the nation’s Eurovision Selection Committee in recent years.

He will be also involved in the organization of the 2020 Eurovision Song Contest in Rotterdam, Cornald has been appointed as the  2020 ESC Creative Advisor.

When it comes to the potential 2020 ESC hosts his name always crops up when the local media speculate on the potential candidates.

Reportedly Cornald Maas has gone on to comment on a Dutch TV chat show ( Showniews) that he will be commentating the competition next year and will not host the event.

Duncan Laurence, the 2o19 Dutch Eurovision winner, is also on the wishlist of the potential ESC 2020 candidates to host the event. It won’t be the first time we see a Eurovision winner host the competition, as in the past many former ESC winners have hosted the event: Corry Brokken (The Hague 1976),  Mans Zelmerlow (Stockholm 2016), Gigliola Cinquetti (Rome 1991), Toto Cotugno (Rome 1991),  Conchita Wurst (Vienna 2015), Marie N (Riga 2003)  and Eldar Gasimov (Baku 2012).

When asked if he would consider hosting Eurovision 2020, Duncan answered that he wouldn’t  mind being one of the hosts in Rotterdam. We will have to wait a little longer to see what key role will Duncan play at the 2020 Eurovision Song Contest. Will he be one of the hosts?

Ilse de Lange represented Netherlands at the 2014 Eurovision Song Contest in Copenhagen as part of The Common Linnets achieving an honorable 2nd place in the competition. She was also the mentor behind Duncan Laurence and his Eurovision entry Arcade, she travelled to Tel Aviv supporting both Duncan and the Dutch delegation.

Dutch media have speculated that Ilse could co-host the event with Duncan Laurence in Rotterdam, if this does happen it will send waves throughout the Eurovision fan community, as both acts are much appreciated and loved amid fans.

Eurovision fans will remember Emma Wortelboer, she was the overenthusiastic Dutch spokesperson at the 2019 Eurovision Song Contest. Her intervention during the ESC 2019 voting led to mixed reactions amid the Dutch press!

Emma has been working for Dutch public broadcaster BNN since 2015 and hosting Emma’s Peepshow on BNNVARA.

Dionne Stax is one of the hot favourites to host ESC 2020 next year along with Jan Smit and Herman Van der Zandt.

The 34 year news reader and tv host has been working at Dutch national broadcaster since 2007. She has presented the daytime news on NOS Journal for many years and has worked on several news programs on NOS, including the evening news bulletin on the public broadcaster.

Last August she left her job as a news presenter on NOS and moved to AVROTROS, sparking great speculation in the Dutch media who went on to hint that this was a strategic move paving the way for hosting the 65th Eurovision Song Contest in Rotterdam.

Romy Monteiro is a celebrated Dutch singer, tv hostess and musical actress. She shot to fame in the Netherlands back in 2014 when she participated in The Voice of Holland. She has hosted various tv shows on AVROTROS and SBS6. In 2017 she hosted the Dutch Junior ESC national final, which was aired on AVROTROS.

In 2019 Romy hosted Dance Sing, a talent show on private Dutch channel SBS6. Dutch media has often tipped Romy as a potential Dutch Eurovision candidate in recent years.It’s yet unclear if we will get to see her represent her homeland in Europe’s favourite television show next year or host the event itself.

Dutch American tv and radio presenter Eva Jinek was born and raised in the USA and is amongst the most sought after journalists in the Netherlands today.

She has great experience in journalism having covered American news in depth on Dutch tv. She has worked extensively on public broadcasters NOS and KRO-NCRV.

Eva has worked both on Dutch radio and tv and is a well known personality in her homeland.

She currently hosts her own late evening talk show Jinek on KRO-NCRV. Many see her as a potential host for next year’s Eurovision edition.

Herman Van der Zandt is the hot favorite to host Eurovision 2020 along with Dionne Stax and Jan Smit. Herman is one of the Netherlands’ most popular news readers, having worked both on the radio and television. He has presented the main news bulletin on NOS (Nos Journal). In 2015 he moved to NOS Sport where he presented the NOS Sports News.

In 2016 he travelled to Rio de Janeiro to cover the summer Olympic Games. The local media are predicting that Herman and Dionne will be given the grand honour of hosting the 2020 Eurovision edition in Rotterdam. We will have to wait a little longer to see if they are selected for the coveted job!

Both Herman and Dionne work in the house at NOS and AVROTROS, point to be taken!

Aran Bade is a devoted Eurovision fan who hosts the RTL Boulevard chat show on private channel RTL 4. He is the  Eurovision expert on the entertainment show, covering all aspects of the Eurovision Song Contest along with all the gossip and news snippets related to our beloved song contest.

Michiel Huisman, the internationally acclaimed Dutch actor, songwriter and singer is reportedly on the list of candidates according Dutch chat show RTL Boulevard. He has acted in both Dutch and American tv series and films, notably in Game of Thrones where he played Daario Naharis.

If NPO selects him to host the competition he will add an international touch to the event as he has acted in many American tv series and Hollywood movies.

Paul de Leeuw is no new face to the Eurovision world, as he has been linked to Eurovision since the 1990’s having gained much experience both as a commentator and spokesperson. His most notable Eurovision intervention was back in 2006 when he read the Dutch results and gave Sakis Rouvas (ESC 2006 host) his mobile phone number on live tv!

Paul is a well known comedian, singer and tv host in the Netherlands. He has worked on several tv shows in his homeland including his own show Mooi! Weer De Leeuw, which was broadcast weekly on Dutch national broadcaster VARA.

The internationally acclaimed Dutch top model and actress Doutzen Kroes‘ name has also been added on the list of the potential Eurovision 2020 candidates according to RTL Boulevard. She has said she would consider hosting the event if she would be next to Michiel Huisman of Game of Thrones fame.

The latest name to be added on the wishlist is the former Dutch Eurovision representative, Edsilia Rombley, who according to RTL Boleuvard has been approached to host Eurovision 2020 in Rotterdam and has reportedly accepted the offer. Edsilia Rombley is no new name on the Eurovision scene as she has graced the stage twice before (1998, 2007).