TVE, the Spanish national broadcaster, has unveiled the 18 candidates who will compete at the forthcoming edition of Operacion Triunfo. Next Wednesday the talent show will see its first gala from where only 16 hopefuls will proceed to the next stage of the competition. One of them will eventually represent Spain at the 2019 Eurovision Song Contest in Tel Aviv.

Spain is all set to kick off the 2019 Eurovision national selection season, being the first country to commence its quest to search its Eurovision hopeful.

TVE confirmed its participation at the 2019 Eurovision Song Contest in Tel Aviv and that OT 2018 would be the mechanism used to determine the 2019 Spanish Eurovision act and entry for Tel Aviv.

OT 2018 will be kicking off on Wednesday 19 September on TVE 1 at 22:30 CEST with a total of 18 young hopefuls battling to qualify to the next stage of the competition, only 16 will go through to the next show. TVE plans to run the talent show for circa 14 weeks.

Operacion Triunfo 2018 will hosted once again by Roberto Leal and will be held in Barcelona. OT 2018 will be co-produced by TVE and Gestmusic.

The Spanish broadcaster has revealed the names of the eighteen lucky OT 2018 candidates. 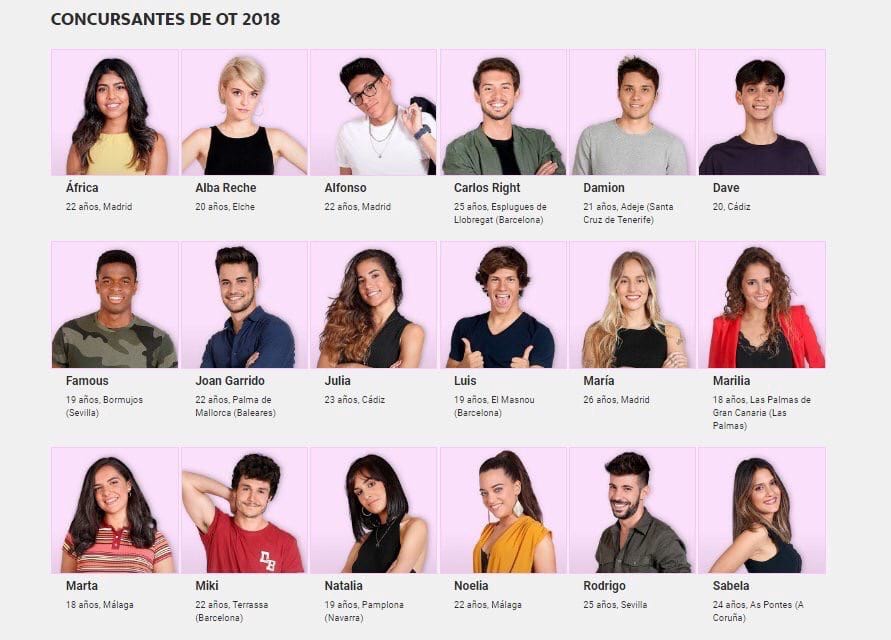 This year saw Alfred & Amaia from OT 2017 represent Spain at the 2017 Eurovision Song Contest in Lisbon with their entry Tu cancion.