The draw for allocating the countries that will compete in the 2018 Eurovision Song Contest semi-finals will be held today at 13:00 CET at Lisbon’s City Hall. The draw will be streamed live via YouTube.

The Host Insignia Handover Ceremony will be held prior to the Semi-final Allocation Draw at Camara Municipal de Lisboa’s Salão Nobre (Noble Hall).

Both the Semi-final Allocation Draw and the Host Insignia Ceremony will be conducted by Filomena Cautela and Silvia Alberto (Eurovision 2018 hostesses). Nuno Galopim and Jose Carlos Malato will be the commentating the event on RTP 1 for the Portuguese viewers.

The Mayor of Kyiv, Mr. Mr. Vitali Klitschko, will officially hand over the keys to the Mayor of Lisbon, Mr. Fernando Medina, at Lisbon’s City Hall-Camara Municipal de Lisboa.

A grand ceremony has been organized for the occasion, where Lisbon will officially take over from Kyiv as the Eurovision host city.

You can watch the Semi-final Allocation Draw live at 13:00 CET via the following channels:

The 37 semi-final competing countries have been divided and distributed into 6 pots specially for the draw.

The distribution of the countries in the 6 pots has been based on the voting pattern in each country in the past  years. This mechanism is used in order to avoid neighbourly voting and countries that tend to vote for each another ending up competing in the same Semi-final.

Which country is in which pot? 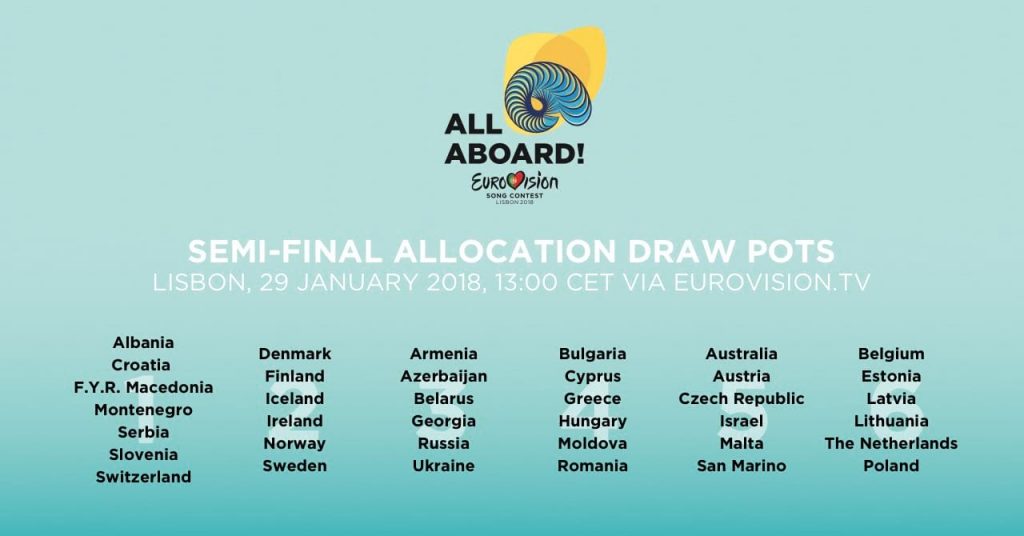 A total 37 countries have been distributed into 6 pots and will be allocated into one of the 2 semi-finals by a draw. The first draw will determine which country will compete in which semi-final.

The Big 5 (Italy, France, UK, Spain and Germany) countries and host country Portugal will vote in the semi-finals too.

The exact running order of the 37 countries competing in the 2 semi-finals on 8 and 12 will be determined by the producers of the show by late March.

The Big 5 (Spain, United Kingdom, France, Germany, Italy) and Portugal (the host country) are automatically qualified to compete in the Grand Final on 12 May.

The 2018 Eurovision Song Contest is scheduled to be held on 8, 10 and 12  May at the Altice Arena in Lisbon, Portugal.