The 2021 Bulgarian Eurovision entry was premiered today during a special concert in Sofia, Bulgaria.

VICTORIA will defend the Bulgarian colours at the forthcoming 2021 Eurovision Song Contest with ‘Growing Up Is Getting Old’.

A total of 6 entries were in the running for Eurovision 2021: GLY CRY, Imaginary Friend, Dive Into Unknown, Phantom Pain, The Funeral Song and Growing Up Is Getting Old.

Marvin Dietmann will be responsible for VICTORIA’s Eurovision staging in Rotterdam.

We are working non-stop with Marvin and I am really happy that we have such а talented director in our team. We worked together in 2020 on the staging for “Tears Getting Sober” and I was really impressed with him.

His feedback helped us a lot with our final choice on the song with the biggest staging potential for Rotterdam 2021. 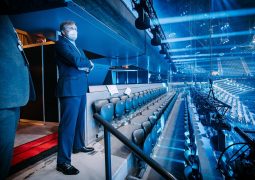