Anastasia Prikhodko, the Ukrainian singer that represented Russia at the Eurovision Song Contest 2009, has released her debut album titled <<Zazhdalas’>>.

The disc includes a wide selection of songs performed by the singer during the seventh season of the Russian version of the <<Star Academy>> show and most of the tracks were written by the Georgian veteran of the Russian music industry, Konstantin Meladze. Her Eurovision entry <<Mamo>> is also included as well as the song with which she competed in the Ukranian national final for the Eurovision Song Contest 2011.

You can purchase Anastasia’s debut album from the official iTunes shop here.

Watch her performing “Mamo” at the Eurovision Song Contest 2009 :

Watch her performing “Action” at the Ukrainian national final 2011 : 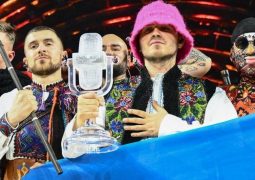