Everything was set for a dazzling show in Bucharest last Sunday, which was going to determine Romania’s entry to this year’s Eurovision. The country’s annual event Selecția Națională returned once again, this time crowning the young singer Ester Peony as its winner, with her song On a Sunday. But does this result really please the majority of the Romanian people?

Following the performances of the 12 competing acts, the voting procedure which would be leading to the winner’s announcement began, with everyone being curious and impatient about the contest’s outcome. According to this edition’s regulations, this would be affected by the public, as well as the verdict of a 6-member international jury panel, this consisting of:

The voting process started with the jurors announcing their personal rank, each awarding their set of 1-8, 10 and 12 points. After that, one of the show’s presenters took the floor and announced the televoting results, which could hardly affect the competition’s outcome, as the public would actually serve as a 7th juror, affecting it only by 1/7 (or circa 15%). Τhis was in stark contrast to the way of voting in the last 3 years, where the audience was playing a significant role in the final of the Romanian national selection.

Initially, Ester Peony collected a total of 62 points and awarded the 12 points from 4 out of the 6 international jury members. However, it would be almost impossible for her to miss the victory, as there was a 12 points gap between her and the jury runner-up Bella Santiago, who received 50 points. When it comes to the public vote, Ester came 8th receiving only 3 points and brought her score to 65 points. In the end, the public’s 12 points and the overall second place went to Laura Bretan, who had been the hot favourite to be this year’s Romanian Eurovision entrant.

It’s noteworthy that if there was a 50%/50% deliberation between the jury and the tele-voting, there would have been another winner: Laura Bretan, while Ester Peony would hardly reach the 3rd place. Here are the hypothetical results of the Top 5 positions:

The result of the competition has caused a lot of reactions on social media from Romanian and international fans, speaking out against the whole voting procedure and the luck of fairness.

We saw on Eurovision.tv’s respective Facebook post here an enormous amount of Eurovision fans, criticising the result, TVR, even our fellow Eurovision fansite Wiwibloggs for their votes. 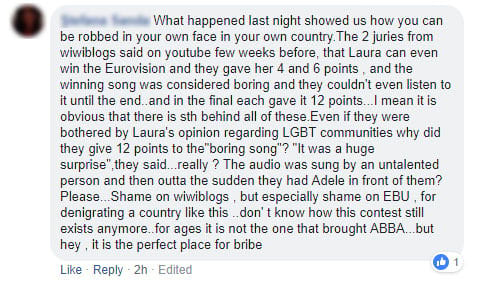 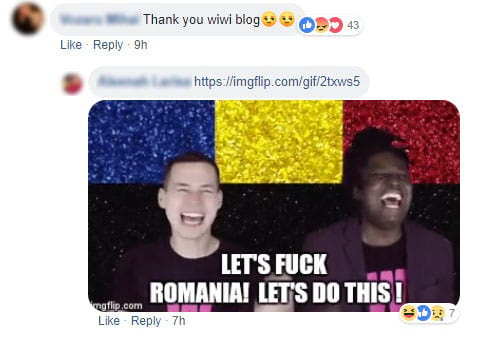 However, there were also opinions which spoke in favour of the voting system this year, as well as the final outcome.

A online petition kicked off

At the same time, a petition has started on avaaz.org, with which Romanian fans request TVR to reconsider the process and protest against the large reduction in their influence on the final result. The petition has already gathered more than 7,000 votes.