ManuElla will be joined by four backing-singers and an acrobat when she competes at this year’s Eurovision Song Contest.

The 27-year-old singer will represent Slovenia in this year’s contest with the song Blue and red. Backing-vocals will be provided on stage by Marjan Hvala, who wrote the song; Karin Zemljič, who also sang backing-vocals for last year’s Slovenian entry, Maraaya; Lea Sirk, who has competed in Slovenia’s EMA Eurovision-selection process three times; and Mitja Bobič, who will be appearing on a Eurovision stage for the very first time.

The performance has been choreographed by Anže Škrube. Anže has worked as a choreographer and dancer both in Europe and the USA. His credits include the choreography for the 2013 tour by Severina, who represented Croatia at the Eurovision Song Contest in 2006 with the song Moja štikla.

The stage performance includes a number of visual effects. The main elements are a LED display, many shades of light colours, fireworks, wind – all these elements give additional value to the performance, Anže explained.

But perhaps most exciting is that ManuElla and her four backing-singers will share the stage with Danish acrobat Jannik Baltzer Hattel.

Jannik is part of the acrobatic trio, No Limits Acrobats, which he formed with his brother Rasmus and their friend, Jakob. No Limits Acrobats competed in Denmark’s Got Talent in 2008, reaching the semi-finals.

Jannick is one of the best Danish gymnasts, and I am very pleased to have him in our team. Let him surprise you with his tricks; you will see them when he appears on the stage. It is all coordinated, and I believe it will have a great effect as a whole, Anže said.

Slovenia will compete in the second semi-final of the Eurovision Song Contest 2016. 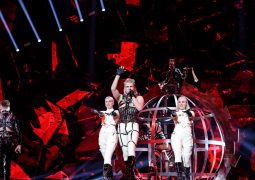