Robin Stjernberg,the 2013 Swedish Eurovision representative  filmed his Eurovision presentation postcard  in the Swedish capital last week. The young singer will show Europe his home as part of the postcard.

While Sveriges Television keeps traveling Europe filming the personalized postcards with all the 39 singers competing on this year’s contest, a special crewl team stayed back in Stockholm to shoot, along with  Robin, the host country’s presentation postcard.

The 22 years old Melodifestivalen winner, shot the principal filmography in a passage in the  Brunkeberg Tunnel, where he met up with his  fans and had a chance to take pictures with them . There are a lot of people constantly coming; they talk to me and I think that’s great, says Stjernberg. That’s what you want. You want to create something with and for the fans, not only for the performer, he adds.

The production company, Camp David Film, also chose to showcase Robin at his home watching the final with his dancers, Juan, Anna and Joao, thus showcasing flashbacks from the  Friends Arena.

The postcard will feature several daily activities by the Swedish representative. We  will see Robin rehearsing with his choreographer, Ambra Succi in dance studio. Viewers will also be able to see Robin talking on the phone with some friends whilst he’s outside a car wash garage.

Robin Stjernberg will perform on home soil on 18 May at the grand final of the Eurovision Song Contest. 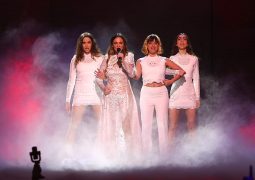