The young Swedish artist who shot to fame in the 2010 Swedish Melodifestivalen and the following year went to represent Sweden in Düsseldorf with Popular, has told Swedish tabloid Aftonbladet he is not planning a return to Eurovision stages.

Eric Saade is releasing two new singles and is reportedly looking for a different sound for his music now. So the 21-year-old singer is also definitely ruling out returning to the Swedish national finals Melodifestivalen, either as an artist or a host. Hosting is not really my thing anyway, I leave that to Måns Zelmerlöv, he quips to Aftonbladet.

You can watch Eric’s live concert as shown on Swedish SVT online on SVT Play and it will be also available on DVD.

Below are the official previews to the two new singles from Eric Saade, one is described more radio pop and the other more urban and hip hop, more in keeping with his new style. They will both be released on 24 October. He will also perform live at the Swedish X-Factor next week. 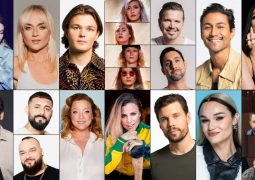