The die is cast! The Cypriot broadcaster CyBC has already made its mind up for Eurovision 2021 and today is the day of the big announcement! It’s the Greek young singer Elena Tsagrinou who will fly their flag this May in Rotterdam, with the song El Diablo!

Last June CyBC announced that its cooperation with Sandro Nicolas who was selected to represent them at the – finally cancelled – Eurovision Song Contest 2020 would not be renewed for 2021 and that the country would be represented by a Cypriot native artist, or by someone known in both Cyprus and Greece. The second scenario was what prevailed in the end. The whole selection process seems to have taken place under extreme secrecy, as there have been no recent rumors about the artist’s name. 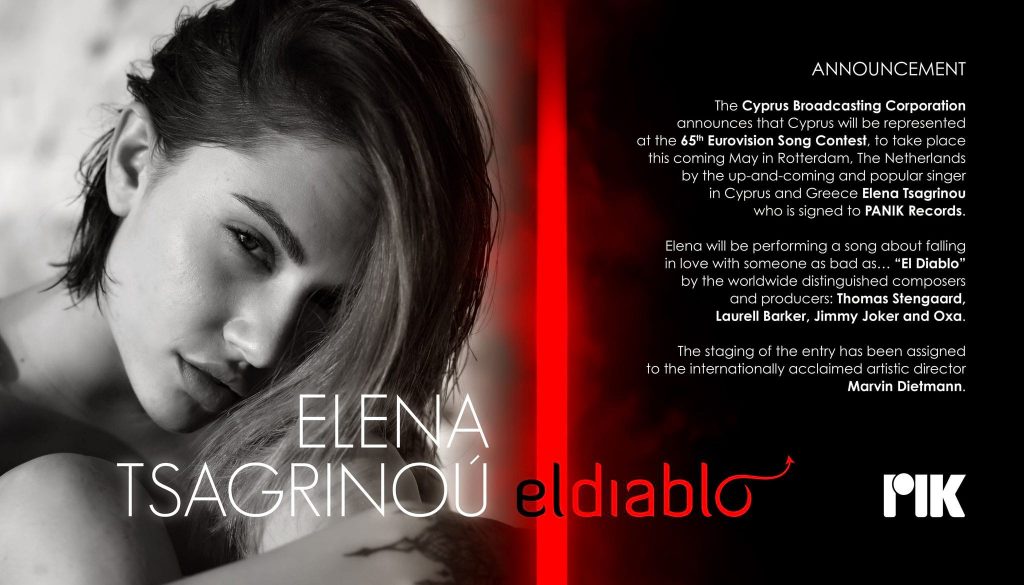 Elena Tsagrinou was born in 1994 in Athens, Greece. Her first contact with the public was at the age of just 14, when she took part in Greece’s Got Talent, where she had a eventually reached the semi-finals. Some years later, in 2013, she joined the group OtherView, as their lead singer, with whom she rose to fame and further success. Five years later, she decided to pursue a solo career in the music industry by signing a contract with Panik Records and releasing her first personal single Pame ap’ tin arhi (Let’s go from the start), penned by the acclaimed Dimitris Kontopoulos, as well as Nikos Moraitis.

Several other singles followed, like Paradisos (Heaven), Logia (Words) and Amore. She has joined forces with big names of the Greek music industry, such as Konstantinos Argiros and the band MELISSES. A few months ago, she also released the single Pare me agalia (Give me a hug), with the hip hop artist Mike, who is also her partner.

Elena is also experienced in TV presenting, as 4 years ago. she co-hosted The Voice of Greece together with Giorgos Kapoutzidis, who has been a Eurovision commentator for Greece in 2006 and every year since 2013 (except in 2018). She is currently running her own music show, the “KPOP stars” on MAD TV, the leading music TV station in both Greece and Cyprus.

Meet the team behind El Diablo

Although we will be listening to the Cypriot entry in a few months from now, we already know that a very promising writing team is behind it. As stated in the announcement, the song is about “someone falling in love as bad as… El Diablo!“. Thomas Stengaard, who triumphed as a songwriter in 2013 with Emmelie de Forest‘s Only teardrops and lifted Germany within the Top 5 with Michael Schulte‘s You let me walk alone, Jimmy “Joker” Thornfeldt, who has written songs for worldwide-known artists such as Jennifer Lopez, Enrique Iglesias and Pitbull, Laurell Barker, who made it to the Top 5 for Switzerland with Luca Hanni’s She got me and the Brazilian-born singer, dancer and songwriter Oxa give the impression that Cyprus will claim to climb high on the scoreboard for another year and, why not, to its first victory.

The song will be unveiled by Panik Records in the first months of 2021.

As it was announced some time ago, the staging of the song will be entrusted to the world-famous Marvin Dietmann, who was also behind the victorious appearance of Conchita Wurst in 2014.

Cyprus at the Eurovision Song Contest 2021

The island of Aphrodite will compete in the first semi-final of Eurovision 2021, which is set to be held on Tuesday 18 May 2021.
The 65th Eurovision Song Contest will take place on 18, 20 and 22 May 2021 in Rotterdam, The Netherlands. The exact format of the contest will be decided a few weeks before, depending on the developments with the COVID-19 pandemic.
ESCToday is growing and always looks for new members to join our team! Feel free to drop us a line if you're interested! Use the Contact Us page or send us an email at [email protected]!