In an interview with magazine DH.be, Nathalie Pâque and Morgane share their memories about Eurovision.

Apart from Eurovision, the artists have more in common: both singers are originally from the Belgium province Liège, Nathalie Pâque born in the city of the same name Liège (Dutch/Flemish: Luik), and Morgane coming from the municipality Blegny.

Moreover, they both gained popularity due to the popular 90’s music programme Dix qu’on aime on RTL-TVI, which was co-hosted by 1986 Belgium Eurovision winner Sandra Kim. 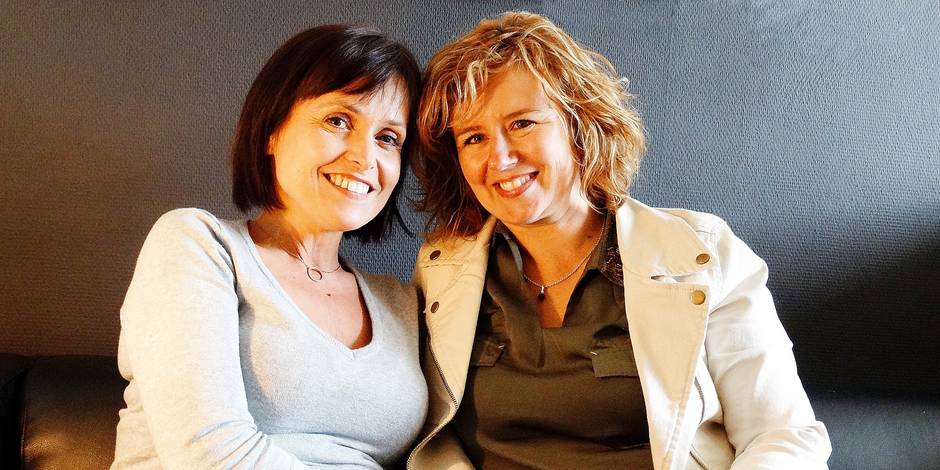 Releasing two albums and several singles throughout the 90’s, Nathalie Pâque also took to the stage as an actress and dancer:

It was not enough to sing: it was necessary to be able to dance, tap dancing. I did it when I was a kid. But when Jean-Louis Grinda, the director of the Liège Opera, offered me an audition, a friend made me work for three weeks. He had prepared a dance routine that made me think that I was the best in the world, which I have never been, but I was chosen and then the choreographer of the show, Barry Collins, made me practice tap dancing for five hours a day. It was strenuous, but I did not give in. And the pace he wanted, I ended up having it. When the main singer of the show had to leave us, they gave me her role. The following year, I played in the musical Titanic. We created the show in 2000 in Liège and for the holidays we performed it in Avignon. That’s where I met my husband.

Nathalie Pâque featured in musicals such as Snow White, Titanic, Singin’ In The Rain, and Broadway Baby. She also became a mother, and has recently picked up her singing career:

Then the time came when being a mother got the upper hand, but one day my son said to me: ‘now, my brother and I are grown up, you can do it again!’ For two years I worked in the Astérix amusement park. I had a job as a singer and comedienne. Then they asked me to do two shows. Together with a guitarist from the park and a percussionist whose son is in a class of mine, we have created an acoustic show, the one we will perform in Belgium.

Nathalie Pâque will perform on 6 October at the theatre l’Os à Moelle in Schaerbeek and on 7 October at l’Académie in Hannut.

Back to the Eurovision years

Morgane went to Eurovision with the entry Nous, on veut des violons (We want violins), by composer Claude Barzotti, who still works with the singer:

Sometimes, depending on the circumstances, he makes sure I take the main singing part! Claude is doing a great job everywhere. With him I have performed four or five times in Lebanon. And also in Senegal. Claude is a regular singer in Quebec. However, Canadian law obliges foreign artists to hire local musicians. So I’ve never been there, and that’s a regret. Quebec is a country that makes me dream.

Singing in churches is really my thing. There is an atmosphere that I love. Jean Vallée has left us, but I would like to continue. Without reproducing his concept, nor his songs. But I have this project: a Christmas show, accompanied by just a children’s choir. It will be a nod to Jean, of whom I still think very much. In my shows, I always manage to include songs by Brel or Piaf.

The artist also fondly looks back on her Eurovision participation:

Magical memories! Turkey was one of the only countries to vote for me. I was invited there. I found myself in the same programme as Kylie Minogue. We were in the same hotel together. I was in heaven…

About Nathalie Pâque and Morgane

Nathalie Pâque (Liège/Luik, 1977) is a Belgian singer who represented France at the 1989 Eurovision Song Contest in Lausanne, Switzerland. With her entry J’ai volé la vie (I’ve stolen life), the young singer, who was only 11 at the time of her performance, reached a respectable 8th place out of 22 contestants, earning 60 points.

The young age of Nathalie Pâque and Israeli representative Gili (who was 12) was criticized in the press, leading the EBU to set the rule that a Eurovision participant must be at least 16 years of age.

Morgane (born Ingrid Simonis, Blegny, 1975) is a Belgian singer. She represented Belgium at the 1992 Eurovision Song Contest in Malmö, Sweden. With her entry Nous, on veut des violons (We want violins) she eventually reached a 20th place out of 23 contestants, earning 11 points.

Following Eurovision, Morgane released various records. She continued to work in the music business, and teaches artistic awareness at a school. Morgane also performs music influenced by rock and gothic.