Conchita Wurst the 2014 Eurovision winner treated her fans with a special live concert yesterday at the Ballhauseplatz in the majestic Austrian capital Vienna. She mesmerized the crowds with a rendition of her Eurovision entry Rise like a Phoenix. 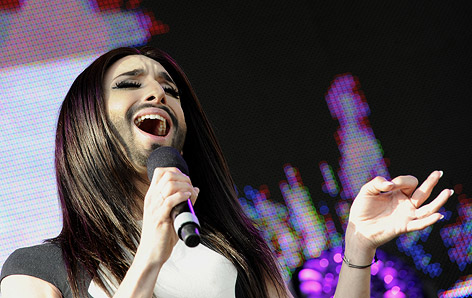 The special Thank you Conchita open air concert was hosted by Kati Bellowitsch and Andi Knoll and was aired live on ORF 2. Conchita’s fans sang along with her when she performed her winning Eurovision entry.

The Queen of Austria aka Conchita Wurst made her first public appearance in Austria after her triumph in Denmark. The Eurovision winner gathered more than 10,000 fans and friends at her live concert. Just before attending the concert Conchita  had the honour of meeting Chancellor of Austria Mr. Werner Faymann and  Austria’s Minister of Culture Mr. Josef Ostermayer who congratulated her for her honorable Eurovision victory. Conchita has brought back the Eurovision trophy on Austrian soil after 48 years.

Stay tuned to ESCToday.com for the latest news on Austria and the 2015 Eurovision Song Contest.