Yes its true the beautiful Ukrainian butterfly Zlata Ognevich got the chance to meet up with Azerbaijan’s Farid Mammadov in the majestic Ukrainian capital city of Kiev.

Farid is in Kiev as a part of his promotional tour. He will also be working on his rehearsals for his performance in Malmö in the Ukrainian capital.

We’ve riding Segway’s in Mariinsky park, laughing and talking like we’ve known each other for ages! says Farid. With such tight schedules as we both are having before the semi-finals, this meeting was a real treat. Zlata is an amazing girl, solid and talented artist. And her song ‘Gravity’ sounds like a fairytale.

After having a short race on Segway, Zlata and Farid didn’t miss their chance to experience the  stage at an open-air concert venue  in Mariinsky Park and show-off one to another their  respective Eurovision entries – Gravity and Hold Me.

When Zlata met Farid – The Video

Zlata Ognevich: This year Azerbaijan is represented by a genuine fire! Farid is a very passionate person, a singer with a burning heart. Hold me – is a touching ballad that fits to your ear from the first moment. I wish Farid will fully open up his sensitive soul and unbelievable vocal talent to Eurovision audiences!

Farid and Zlata also made small gifts to each other. Zlata has presented a souvenir plate with Ukrainian national motives to Farid, whilst  Farid gave Zlata a box with real live butterflies. They released them in the park.

Butterflies are no coincidence. Since there is a line about butterfly in Zlata’s song Gravity and also Eurovision 2013 in Malmö has a butterfly as its official logo. Last year, in 2012, Eurovision Song Contest was hosted in Farid’s homeland Baku.

Farid and Zlata were very happy with their meeting in Kiev. In end Farid confessed that he wouldn’t mind coming to Kiev next year as guest of the Eurovision 2014, if the Contest arrives to Ukraine.

Stay tuned to esctoday.com for the latest news on Azerbaijan and Ukraine and the 2013 Eurovision Song Contest. 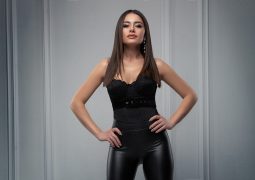 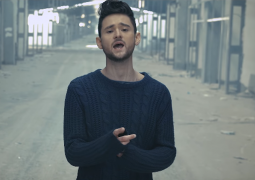