Hungarian national broadcasting bodies MTVA and MTV have just revealed the rules for the 2013 participation at the Eurovision Song Contest in Malmö. They say in their press release that they were really happy with the ratings of around 2.5 million for last years national final A dal.

They will repeat the same format with semi-finals and a final, with a panel of judges consisting of Philip Rákay, intendant of the M1/M2 channels, Jenő Csiszár, radio host, Compact Disco singer Csaba Walkó and the composer Victor Rakonczai, with a fifth  female member of the jury.

M1 channel will also broadcast both the semi-finals and the final live from Malmö.

Songs can be submitted until 20 December and the usual Eurovision rules apply. The songs in the national final will have to be sung in Hungarian, but the artists can attach an English version as well, and the broadcasters may decide to use them for promotional purposes. It is also stated that MTVA and MTV make the final decision on what language the Hungarian entry will be sung in Malmö. The participants also have to assure, that they will be available to take part fully in the Eurovision project and have no other commitments. MTVA and MTV also reserve the right to change the artist, the title of the song, the language and even the name of the artist or the band up until 5 days before the Eurovision Song Contest submission deadline.

The audio material  can be submitted on CDs or DVDs, including promotional material of the artists as well as biographies in Hungarian and English, lyrics and the video, if available. A signed acceptance to the rules must also be enclosed. The address for the submissions is:

Last year 202 songs were submitted in Hungary, and 20 of these made the semi-finals. The Hungarian entry Sound of our hearts reached the 24th position in the Baku Eurovision Song Contest final. 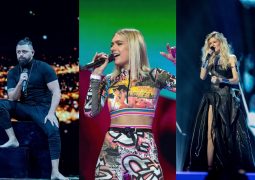