The EBU has confirmed today that the forthcoming 2021 Eurovision Song Contest will be held in Rotterdam adapting Scenario B and has published a Health and Safety Protocol for the event.

The EBU and the 2021 host broadcasters NPO, NOS and AVROTROS have released a Health and Safety Protocol for Eurovision 2021. All attendees and accredited individuals will have to comply with the protocol’s rules and regulations in order attend the event. The protocol follows the Dutch government’s guidelines set for large events such as sports events.

The spirit and tradition of the Eurovision Song Contest is about uniting Europe on one stage and we are very much still determined to achieve this in Rotterdam in May.

We are moving forward with our plans to produce a safe Eurovision Song Contest, with all artists performing live in Rotterdam. This protocol demonstrates our commitment to make this happen, with the health and safety of everyone attending, including crew and press, our top priority.

In recent months, a lot of hard work has been done behind the scenes on this extensive Health and Safety protocol, in order to allow us to stage this year’s Eurovision Song Contest in a responsible manner.

With the help of extensive testing, mask wearing, hygiene measures, attention to ventilation and innovative measures, we will create an environment in which crew, artists and the press can work as safely as possible.

The EBU reaffirms Scenario B for Rotterdam 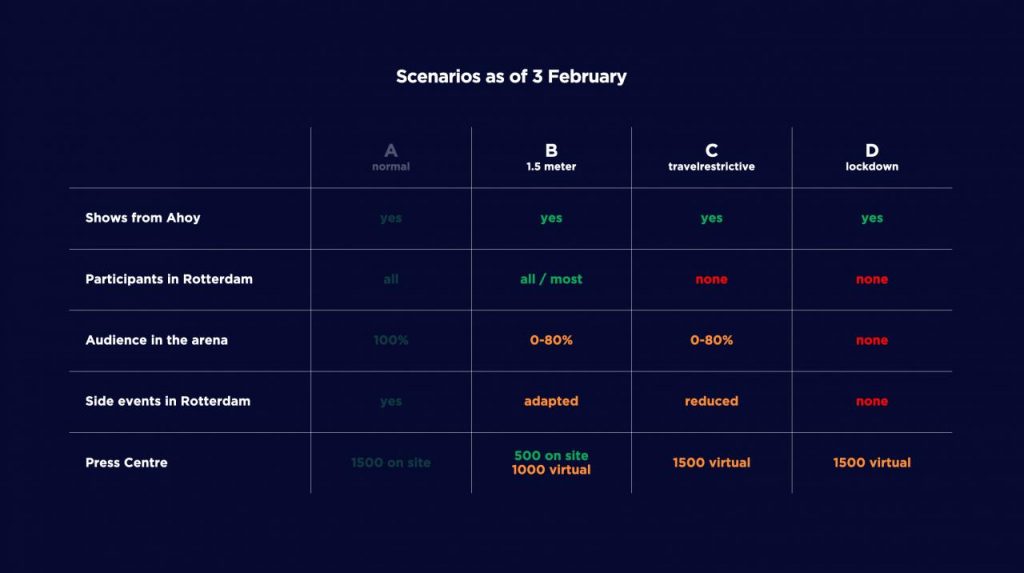 The EBU has decided to opt for Scenario B in order to hold the upcoming Eurovision edition. The EBU states:

In February it was announced that a “normal” Eurovision Song Contest could not take place under the current circumstances and that organizers were “determined yet optimistic” that the 65th edition of the world’s largest live music event could take place in a B scenario with strict health and safety measures and social distancing.

The decision was recently reaffirmed by the Eurovision Song Contest Reference Group, the event’s governing body, and the EBU’s Executive Board.

Should circumstances change in the coming weeks the event can still be scaled down.

To make the event viable in a B scenario, the number of people in each delegation has been massively scaled back from previous editions. The number of journalists who can attend the event will also be capped at 500 with a further 1000 able to cover the show in a new online press centre.

A decision on whether an audience can be present at the shows and on what public activities can take place around the event in Rotterdam will be decided at a later time.

The EBU will be carrying regular testing at the Ahoy during the Eurovision period in order to guarantee the safety all accredited individuals, artists, delegations, press etc. The EBU goes on to state:

All those attending the Eurovision Song Contest from abroad are recommended to go into quarantine for 5 days before departure to the Netherlands and they must test negative for COVID-19 at most 72 hours before they fly.

Once in the Netherlands, delegations have to stay in their hotel, except when they travel to Rotterdam’s Ahoy Arena for rehearsals, the live shows and other programme related activities.

Everyone working in the Ahoy Arena, including crew, artists and press, will be tested regularly in a special facility next to the arena.

The testing strategy is currently being developed, based on the guidelines of the Dutch National Institute for Public Health and the Environment and the Ministry of Health, Welfare and Sport in the Netherlands.

The full protocol can be read here.

The measures have been approved by the the Safety Region (Veiligheidsregio Rotterdam-Rijnmond) the official authority reviewing and approving health and safety plans for events; and validated by SGS, an international agency specializing in the review of such plans.

The protocol can be adjusted at any time should new developments demand and begins before artists and delegations even arrive in the host city.

Our goal is clear: to prevent transmission of the virus during the event. If someone tests positive, our isolation protocol comes into effect, we support the relevant authorities with track and trace research and we take additional measures where necessary. If a participant is unable to perform live as a result, the backup recording will be used.