The Spanish delegation arrived last night along with the 2011 Spanish Eurovision representative. Lucia will be touching the Dusseldorf stage for the first time today during the 1st Spanish techical rehearsal. TVE hosted a special press conference on Thursday in order to present the Spanish candidate and the national broadcasters schedule and plans for the Eurovision week.

During the press conference Lucia mentioned she will be dressed by a Galician designer on the Eurovision night. RTVE, the Spanish national broadcaster will be having an extensive coverage of the forthcoming Eurovision Song Contest. For the first time ever, TVE will broadcast both semifinals live on TVE 2 and on their website wwww.rtve.es.Whilst the national final will be broadcast live on TVE 1. It is most lilkely that all 3 shows will be aired on TVE International live ( via satellite) and in recorded version on TVE International America, Asia and Africa.

Well known Spanish television presenter Jose Maria Inigo will be the commentator for TVE, thus giving the Spanish audience all the details on the competing artists and entries. Elena S. Sanchez will be the spokesperson in charge of giving out the Spanish votes on the 14th of May. 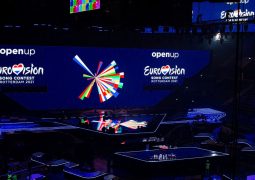