Conchita Wurst was part of a special mass celebrated for World Aids Day.

The ecumenical mass in Vienna’s Stephan’s Cathedral was an initiative of the Archdiocese Vienna and HIV/AIDS-awareness organization Life+, known of the annual Life Ball.

Special guest was artist and 2014 Eurovision winner, Conchita Wurst (Thomas Neuwirth). Conchita offered a heartfelt prayer in front of the public. Together with Conchita, the congregation prayed:

Help us, to break through all exclusion and discrimination. 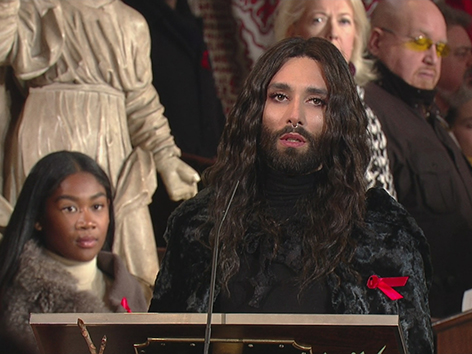 Before the mass, a torch-light procession went from Vienna’s Westbahnhof (West Train Station) along Mariahilfer Street to Stephan’s Cathedral. The cathedral was decorated with colourful transparent drapery’s, carrying the names of victims of the Aids-epidemic. 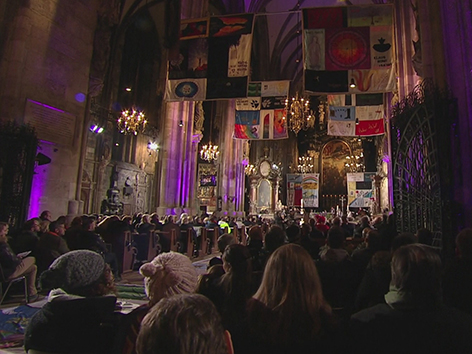 Highlight of the evening was a performance of Mozart’s Requiem by the Chamber Orchestra Vienna and the Philharmonic Choir Vienna, conducted by Keri-Lynn Wilson, interpreted by tenor Levy Strauss Sekgapane, soprano Julia Novikova, mezzo-soprano Elena Maximova, and bass-baritone Andrea Mastroni.

Conchita Wurst is a spokesperson in benefit of HIV/AIDS awareness, frequent guest of the Life Ball and ambassador of acceptance, diversity and anti-discrimination.

Enjoy Conchita Wurst performing Rise like a phoenix at the Grand Final of Eurovision 2014: