The Swedish broadcaster SVT will start revealing the artists and the songs taking part in the 2013 Swedish final Melodifestivalen next Monday, as reported before by Esctoday.com. We now know that the revelation will take place in two live press conferences in Stockholm, starting at 10.00 CET Mondays 19 and 26 September.

In the first press conference the artists and songs for the first two heats in Karlskrona and Gothenburg will be revealed, and the on 26 November it will be the turn of the artists from the Skellefteå and Malmö heats to be presented. SVT will do the revelation differently this time: Those watching the webcast online at melodifestivalen.se will get to know the artists in a short interview already before they are presented one by one to the journalists present at the press conference.

So at 10.00 CET for two Mondays the fans of Melodifestivalen will get a ringside position to see who will be the 30 artists, that will be in the running to be the home entry in Malmö 2013. SVT has now let those who are selected know, that they are in. So those who were not lucky this time are free to use their songs in other contexts. Producer Christer Björkman is thanking all the songwriters who have made his job especially difficult in choosing the entries. I want to once again point out, that this is not only a competition, but also an entertainment show that everybody wants to be part of, he concludes.

Of the 2549 entries sent in to SVT, a selection jury picked 16 candidates. The other half have been completed by SVT by inviting artists and songwriters.

It is already known that the Svensktoppen nästa contest winner Terese Fredenwall is in with the song Breaking the silence as well as Elin Petersson with the song Island. 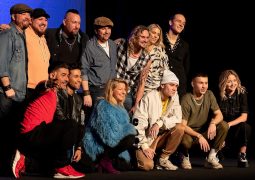