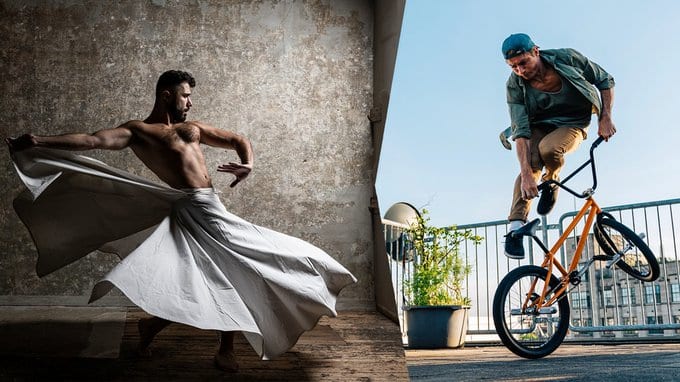 During the second semifinal of the Eurovision Song Contest 2021, a special performance will take place with classical ballet dancer Ahmad Joudeh and BMXer Dez Maarsen from ISH Dance Collective in the lead.

During our shows we will show the best of the Netherlands and each performance will have its own story. In this spectacular dance act we  will tell the story of our natural desire for connection.

The performance therefore has the appropriate title: Close Encounters of a Special Kind.

Ahmad Joudeh is known for his impressive documentary “Dance or Die“, which won the prestigious Emmy Award in the Arts Programming category in 2019. For his performance he combines classical ballet, contemporary dance and the Arabic Sufi (twirling).

He will perform this performance in collaboration with the Flemish-Moroccan choreographer Sidi Larbi Cherkaoui. The choreographer is no stranger to the dance world: he has won several important international prizes. In addition, he was appointed as the artistic director of Ballet Vlaanderen and choreographed the video clip “Apeshit” by Beyoncé and Jay-Z at the Louvre.

This will be the most important performance of my career. My mission in life is to tell my story because my story relates to many people who need a voice.

Our society consists of people from different places and with different cultures, yet we are all Dutch.

That is also what you will see on stage: diversity. We are all different, but also all Dutch. Together with Dez and the other dancers we will tell the story of the Netherlands: the power of unity.

Dez Maarsen is number one in BMX flatland. He performs surprising tricks using only a BMX bike. For this act BMX-er Dez is building a completely new bicycle, so that it fits into the artistic overall picture of the act.

Our performance is poetic. It is about people from different cultures who, despite their diverse backgrounds, find a common ground.

Dez’s BMX performance will be choreographed by Marco Gerris, who won the prestigious Prins Bernhard Cultuurfonds Prize in 2020 together with ISH Dance Collective.

It will be a unique, graceful, graceful and aesthetic appearance: really a total picture.

Ahmad Joudeh and Dez Maarsen will be the interval act during the Second Semi-final of the 2021 Eurovision Song Contest in Rotterdam on Thursday 20 May.

The 2021 Eurovision Song Contest is scheduled to be held on 18, 20, 22 May at the Rotterdam Ahoy in Rotterdam, the Netherlands