Congratulations Jamala! The Ukrainian artist and Eurovision 2016 winner has confirmed that she is pregnant with her first baby.

Rumours about Jamala’s pregnancy were spreading lately. Jamala and her husband Bekir Suleimanov, who married each other earlier this year, finally revealed the happy news on the singer’s Facebook page:

Of course, I would like to keep it secret and share the news only with the closest people, but many have already guessed it. This is the greatest miracle in the world! 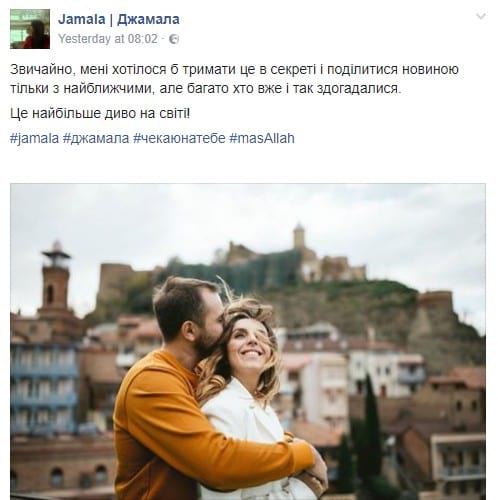 ESCToday congratulates Jamala and Bekir, and wishes them all health and happiness!

Jamala certainly has a reason to smile:

Jamala represented Ukraine at the 2016 Eurovision Song Contest in Stockholm, Sweden, with the dark heartfelt song 1944. Progressing to the Grand Final, Jamala and 1944 ultimately won the contest, receiving 534 points.

Enjoy Jamala performing 1944 at the Grand Final of Eurovision 2016: