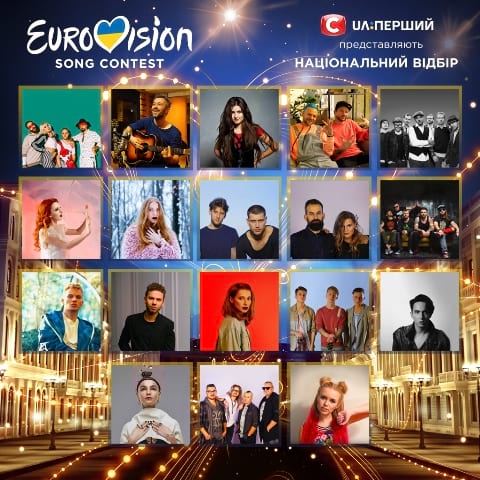 The semi-final allocation draw to determine the running order of the 18 competing acts will be held on Friday 19 January.

Ruslan Kvinta, the producer of the national selection says:

During the first stage of the selection, we received over 1,000 applications, this shows how our music industry is developing strongly. I am proud of the fact that today Ukrainian songs acquire an entirely new face: modern and fashionable. Our target is a quality song, which should include the following features:  the love of music, a bold decision and the personality of the artist. It does not matter  whether he/she are known or not. I can easily say that  during the live show, the viewer will hear very good music and will see the strong artists. I personally believe in each of them, moreover, all the songs are written by the participants themselves, and as a producer I am very pleased.

I want maximise that I would like to diversify the composition of the participants by genres and styles to show the tastes of the performers and their creative component. I was accessible to anyone who wanted to meet me and discuss their repertoire. I can say that I was pleasantly surprised with  some of the  artists, I was pleased with their serious approach and with the fact that they listened to my recommendations.

About the 2018 Ukrainian national selection

The 2018 Ukrainian Eurovision national selection will consist of a total of 3 shows (2 semi-finals and grand final). All 3 shows will be aired simultaneously on STB and UA:PBC’s Channel 1.

The submission period for artists to submit their entries in their quest to represent Ukraine at the 2018 Eurovision Song Contest opened on 10 October 2017 and concluded on 15 January.

Ruslan Kvinta has been appointed as the music producer of the Ukrainian national selection.

The national selection will consist of 2 stages:

The 2018 Ukrainian Eurovision entry and act will be determined by a mixed jury/public televoting deliberation.