Thunder and lightning it’s getting exciting down under as the Aussie Eurovision fans are all set to embrace the Eurovision Song Contest when they set sail on a special cruise in Melbourne. ESCFan, OGAE Australia and Joy 94.9 present you the 2017 Eurovision Preview Party Cruise on Saturday 8 April. 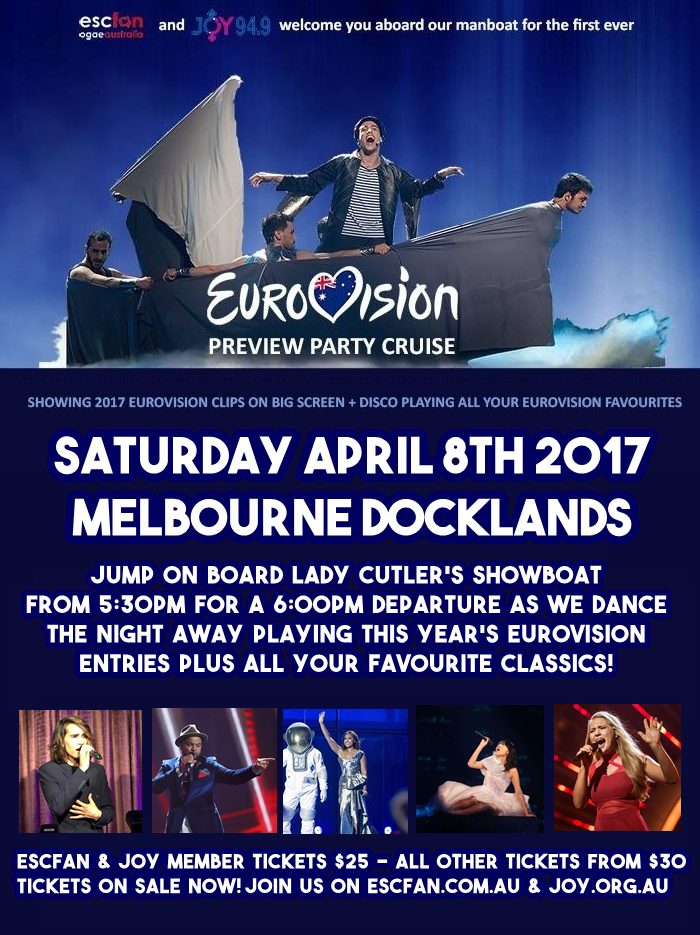 Come and sail The Lady Cutler in celebration of the upcoming 2017 Eurovision Song Contest held this year in Ukraine, with a preview of the competing artists and songs, and a chance to vote for your favourite entry!

With 43 competing nations, this will be the year when Australia will aim to show Europe that last year’s 2nd place was not due to Beginner’s Luck, but that the Aussies really do belong in the contest. This year’s representative Isaiah Firebrace, winner of X Factor Australia 2016, will sing Don’t Come Easy. At only 17 years of age, Isaiah has some big (and sparkly) shoes to fill after Dami Im’s stellar performance last year in Sweden.

As you leave the Melbourne Docklands for the Aussie ESC sunset celebrations, you can view all the competing 2017 filmclips on big TV screens, as well as dance the night away at our disco playing all the best Eurovision classics.

Drinks and food will be available on board for you to purchase, and prizes will be awarded on the night. So, dress up as your favorite act and put on your dancing shoes.

Boarding starts at 5.30pm, with the boat leaving promptly at 6pm. Tickets can be puchased here.

ESCFAN (Eurovision Song Contest Fans of Australia Network) is an independent and official Eurovision club that represents Australia fan interests, as well as those who have links to Australia and/or appreciation of Australias’ role at Eurovision. ESCFan is now also OGAE Australia. You can become a ESCFAN member or read more about the club here.